The Art Group are a provider of high-end wall art and are proud suppliers to a wide range of retailers, hospitality establishments, retirement villages throughout the UK and beyond. Some of their retail partners include names such as Next, Home Sense and range of independent galleries and art retailers. It was this opening in the market with retail partners that allowed The Art Group to bring contemporary fine art to a far wider market. I spoke with Michael Lipman, the Sales Channel Manager at The Art Group to really delve into the company as a whole, find out what their plans are for the future and proud moments for the team and company.

I firstly wanted to find out more about their company ethos and inspiration behind The Art Group as a whole. Michael spoke about how “Art for all” has always been a longstanding mantra of theirs; bringing great quality, affordable art products to consumers across the globe. The Art Group pride themselves on striving to produce art that is accessible to everyone, but at the same time adds the all important ‘wow factor’. Having dominated the high street retail market for a number of years, as well as working with a multitude of independent galleries, their next goal is to move into the direct supply of the hospitality and service industries. 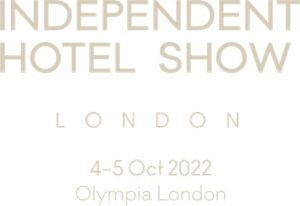 Diversifying into direct supply of the hospitality sector is their goal currently and they are making moves towards this by forging links with Hotel Suppliers and by being part of The Independent Hotel Show in London, in October this year. Michael explained that he is confident that given the opportunity to demonstrate the quality and diversity of their offering to hoteliers, they will achieve their aim of becoming the ‘go to supplier’ of wall art to the hospitality sector globally. The Art Group, as an experience licensee and manufacturer of wall art, stands out from their competitors as they possess a vast range of assets across a multitude of genres. They have also been appointed as the exclusive licensee / manufacturer of recognisable brands such as Disney, Marvel, Time Life and many more.

The Art Group offers manufacturing supply routes from the UK as well as across the globe. This enables them to produce wall art across many different substrates and formats whilst keeping to very short lead times and guaranteeing competitive pricing. All in all this makes The Art Group a preferred choice for many retailers across the UK. In addition to this they fully utilise their capabilities across a dedicated team of designers and licensed artists to produce unique pieces that are tailored to the customers specific requirements.

Being that The Art Group has such a diverse offering I asked Michael to explain to me where their design ideas come from. He explained that a lot of what they produce is very much trend led, and they invest a lot of time and energy into ensuring that they anticipate the trends that means they lead rather than follow the crowd. Michael also said that they have strong relationships with a large number of artists, photographers and licenses; this ‘hive mind’ of experts coupled with their own dedicated team of designers and researchers enables them to be at the forefront of what’s new to the market.

I was sure that The Art Group have had many proud moments and accomplishments over the years, and I wasn’t wrong as Michael said he felt as though it is difficult to pinpoint a particular proud moment, but he is immensely proud of what The Art Group has achieved and the position that they have forged as being the ‘go to’ supplier of wall art in the retail market globally. Over the years, they have gone from strength to strength, and have become the leaders in their field. Michael said he gets a real buzz from unveiling their new ranges, which just get bigger and better each time. The Spring Fair is a huge show at the NEC is a big deal from the company and industry, and The Art Group use it as a spring board to launch their new ranges. This year was better than ever before as they launched their incredible Premium Edit, and the feedback they received was just phenomenal. The range is very high-end and fabulous, utilising lots of new styles and techniques and Michael was genuinely proud to introduce it to their customers. 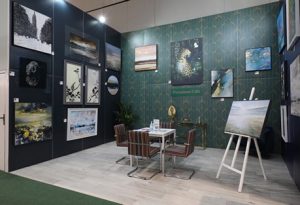 The Art Group will also be taking The Premium Edit to The Index Show this month and Michael is confident that it is going to get the reception that it deserves. They are very excited to be a part of it and he is looking forward to bringing The Art Group to a whole new market. I could see the passion that Michael has for the company and the artwork that they offer so I asked Michael what his favourite piece was (if he could name one!). As he explained, The Art Group represent a lot of popular artists, and picking a favourite is obviously a very personal thing, not to mention a tough choice! If he was forced to make a decision, he would have to say Yellow Matter by Scott Naismith, who has been one of their best sellers for a number of years. The bold abstract pieces are spectacular, and his particular piece if part of the Premium Edit. It’s 85 x 85cm and is a canvas that comes in a slim dark grey frame that is a very contemporary finish, which is growing in popularity all of the time. 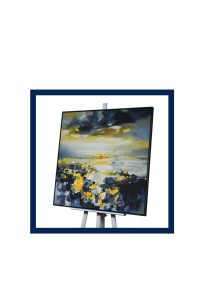 With such an emphasis on being the leader in the industry, it is no surprise that The Art Group are continuously releasing new artwork, so there’s always something exciting in the pipeline. Their premium ranges incorporate some really special techniques and finishes; from opulent gold foil embellishments to prints on aluminium and crystal clear acrylic. Every quarter they release their New + Trending publication, showcasing new offerings. Michael said he’d encourage anyone with an interest in art to subscribe using the QR code below. 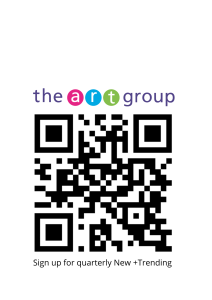 The global pandemic was and has been a really tough time for a number of businesses so I wanted to know from Michael how it effected The Art Group. He explained that due to their global reach they were able to withstand many of the pressures of the pandemic. Additionally, whilst the high street market really suffered during parts, online was able to remain operational and in many cases expand their services. People have spent far more time than usual in their homes, and a lot of people had a lock down project or makeover, which has accelerated the demand for wall art and the desire for people to invest into their homes, which I believe is a trend that is set to continue.

The Art Group have supplied to a lot of high-end galleries as well as high street retailers and their business with both garden centres and online retailers has gone from strength to strength during the pandemic as they have continued to trade whilst others have found it more challenging.

I have no doubt that in the near future we will be seeing The Art Group become the ‘go to’ artwork supplier for the hospitality sector!