Twenty years ago, on January 18th 2001, we incorporated as Magic Man Limited. What better time to take stock of how we got here, particularly beneath the backdrop of an international pandemic? If we were celebrating a wedding instead of the founding of a company, it would be our china anniversary which is highly appropriate because ceramics is just one of the many hard surfaces we repair to perfection as part of our day to day business.

If we consider even that substrate alone (and if we listed everything Magicman can repair, we’d be here all day), the number of ceramic repairs that we have conducted over the decades in homes, new builds, commercial premises and even cruise ships, must be in the hundreds and thousands and yet we have never been more relevant and continue to thrive. Try to picture the mountain of tiles, basins, sanitaryware, statuettes and figurines that have been saved from landfill over the years and you will realise how important on-site repairs are to sustainability today. Every time you choose a repair instead of replacing a broken item, you negate the need to manufacture, transport and install a replacement, and thereby contribute a little to protecting the planet. This is what Magicman have introduced to the building, insurance and marine sectors.

As we celebrate 20 years as Magicman, we remember also that our history goes back even further. As  the originator of on-site multi surface repairs,  our CEO Mark Henderson and Head of Technical Services Kevin Maxted had operated for almost 8 years previously as both sole tradership and Refurb UK before renaming the company. The business was founded by Mark Henderson, a former Royal Navy engineer and shipwright, who when leaving the service was looking for a new challenge and settled on a bathroom and kitchen repair and resurfacing franchise. With the values of ‘make do and mend’ instilled in him while in the Navy, Mark could see the opportunities in combining the new skills with those repair techniques learnt in the RN and the advantage in repairing items over replacing them. Until that point, construction damage usually resulted in an automatic replacement with all the associated problems of supply, time delays and ancillary damage, as well as significantly higher costs. On-site repairs or ‘snagging’ was the answer and could successfully be applied to wood, laminates, ceramic tile, vitreous china, fibreglass, brick, stone, marble, uPVC, powder coat… virtually any hard surface you could think of, including glass.

Key to the early development of the business was Mark’s first employee Kevin Maxted and both have remained mainstays or the business. They began operating out of a garage workshop and built the company into an international business with a team of technicians nationwide, fully trained at their own Magicman Training Academy. Today Mark is CEO of the Magicman Group and Kevin is Head of Technical Services and Research and Development and the term ‘Magicman’ is shorthand within the industry for an on-site repairman or snagger, as interchangeable as Hoover is as a general name for a vacuum cleaner or verb for vacuum cleaning.

For decades our trademark has carried the strapline “repair, renew, restore” which is just another way of saying adapt and reinvent, something we excel at. And in that spirit you might take a few liberties and paraphrase the immortal Bard by asking after 20 years, “would a Magicman repair by any other name look as sweet?” Well no, quite frankly! Success has spawned many imitators, often with some synonym of ‘magic’ in their name so beware of pale imitations and ensure you are booking the real Magicman or you may learn another valuable maxim, ‘buy cheap, pay twice!’ 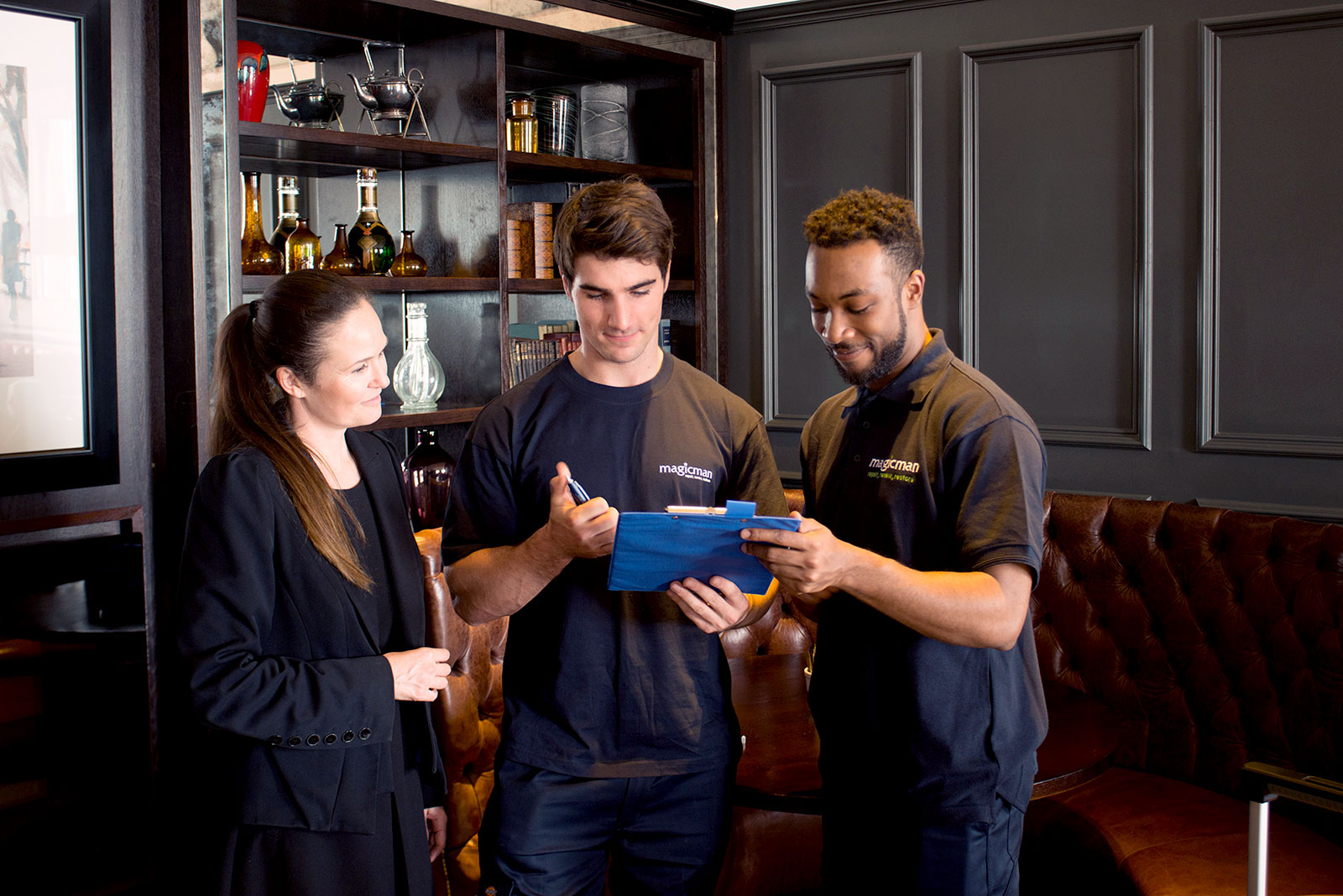